The wind had dropped so we made early departure around to Zululand Yacht Club,ZLYC.As we arrived a man in a pink t-shirt guided us in and helped with mooring.this was a local called Lawrence.then Lotus also came in.Lawrence and his wife Anne invited us on to their catamaran for coffee and mince tarts,and then said they were leaving to see Endomeni wild cat sanctuary in 15 minutes with 2 other cruisers and we could come if hurried-which we did,and had a great day,a rapid intro to sth African wildlife and hospitality
the African wild cats look like large house cats.the next type were the Caraval,then the Servals
the highlight was the cheetahs.patting them was amazing.our guide,Dhumali,was amazing.he had hand reared many of the cats
the other 2 cruisers were Cornelius and hans from SV Future
we stopped at local market-good fruit and curios
that night at ZLYC was braai night.a huge T-bone for $6. 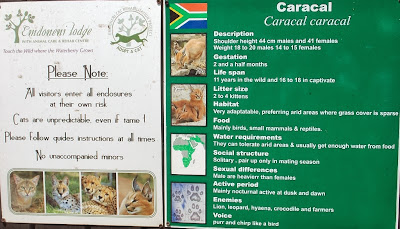